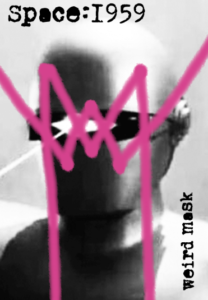 As rocket ship X-13 sped through the galaxy faster than any other X rocket before it, the captain of the ship, Captain Dick Rod, walked his broad and tall frame into the workshop. There was a man, shorter and wider than the captain, but solid as a rock. His thick, hairy arms exposed from his overalls, covered in grease to the elbows as he connected two red wires.

Lt. Jacko Smashem flinched. “You would think that I would get used to you walking in on me since we are the only ones on the rocket, but I don’t know if I’ll ever get used to a six-foot-five adonis, such as yourself.”

Dick smiled. “How is the new ro-but coming along?”

Jacko finished tightening up a screw and said, “It’s a ROBOT, and he’s coming along fine. I think he’ll be done as soon as I flip this switch…”

They stood in anticipation as the bulky rectangle of metal beeped and lit up with life.

“Ro-Tit-Tin… reporting… for duty,” said the machine in a high pitched robotic voice.

The captain furrowed his brow. “Ro-Tit-Tin?”

Jacko smiled. “Yeah, it means Robot made from Titanium and Tin.” He laughed and slapped the robot on what would be it’s back and said, “All right, Tin. How do you feel?”

“It is if it’s the truth,” Jacko said, lifting his cigar stub.

“I have… no feelings… I am… only programmed… to serve.”

The captain chuckled. “Jacko, if you could get a woman to say that, I’d give you my last dollar.”

Grinning, Jacko agreed, “Been working on that one my whole life.”

Suddenly, an alarm started ringing out in the rocket.

Jacko’s cigar almost fell out of his mouth. “Two weeks in this rocket and that’s the first alarm we’ve heard!”

Dick nodded in agreement and spoke, “Ship? What is the problem?”

“To the bridge!” Captain Rod shouted. “You too, Tin! We may need you.”

The two men ran down the long, narrow, empty corridor until they entered the bridge. Tin, would take a minute more to arrive. Through the space-glass, they could see a dark ship floating aimlessly ahead of them.

“Lights out. They don’t have any power,” Jacko said.

“Approach slowly and cautiously.” Dick sat in his captain’s chair rubbing his square jaw. He looked around his seat feverishly until he found a pack of cigarettes. He lit one up and seemed to calm down almost instantly.

“Ship, do you know how long the message has been broadcasting?”

He looked behind him and saw Tin finally make his way onto the bridge. “Any thoughts. Tin?”

Dick exhaled a thick cloud of blue smoke and said, “Then we will have to rescue them. No matter what.”

Jacko swallowed hard and said, “You mean a… spacewalk?”

TUNE IN NEXT WEEK FOR THE NEXT EXCITING INSTALLMENT OF…