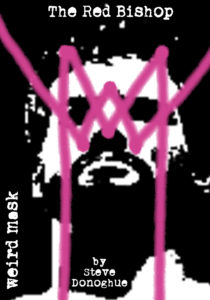 The innkeeper had betrayed him .
The little courtyard behind his room, walled on all sides by the rear of adjoining buildings, was still deep in shadow. The Saint’s tactical training scanned the space at a glance: a shin-high wall along the north side, only a handful of overlooking windows, one narrow alley leading to the west, probably to a street or square. The sky overhead was only lightly streaked with the coming day; crowds and bright sunlight were still an hour away.
He took what advantage he could find, however slight; he moved to the corner formed by the wall and the far wall, with access to that alleyway.
He could hear the ghouls shuffling through his room. He could see their shadows in the doorway.
He did not fear them. What he feared was the moment when he had called upon his Lord and heard nothing in response. In all his adversities since catastrophe had first claimed his life, this had never happened.
He composed himself for a moment and tried again: **Lord, strengthen me against these creatures.**
Since his Lord lived everywhere in all things, the response should have been immediate. But as the three dead brigands emerged from the inn, the Saint felt only a tiny inner twinge of piety. He watched as his sightless enemies, sniffing and groping, detected him, and he felt alone in the dusty little yard.
The dead brigands seemed to move roughly, as though moved by a distant hand rather than their own muscles. Their footsteps made obscene squelching sounds as they walked in their own pooled blood, and their milky eyes were rolled upward. Flies crawled in their dirty hair.
The Saint raised his sword and prayed again with forlorn intensity. ** Lord, do not abandon Your servant in his hour of need. Strengthen me against these agents of darkness , I beg.* *
There was a muted, straining response. A trickle of vigor began to run through his limbs, only a small hint of what such a fervent prayer had brought him only two days before, when he found himself facing a demon-possessed mountain bear.
But there was no time to hope for more. The first ghoul lunged thickly at him, dense white phlegm gurgling in its throat. The Saint could see at once the unnatural strength in the lunge; he must not let these creatures touch him.
He swept his sword up in a backhand arc, catching his attacker’s arm just above the elbow. The skin was already lightly mottled with rot; the blade swept through it with almost no resistance, and the arm fell to the courtyard.
The maimed brigand didn’t even flinch, just swung its remaining arm at the Saint’s head. He ducked, noting that the other two were closing behind their leader. Must not get cornered away from the alley entrance.
The vigor of the Lord was still lingering in his limbs, and he could no longer be certain it would remain. He gripped his sword with both hands, planted his feet, and struck the ghoul’s had from its shoulders. The head fell to the dirt. The body remained standing but stopped moving. On the periphery of his senses, the Saint could virtually feel an unseen force keeping a grip on the decaying body.
The other two struck in near unison, and he dodged quickly to the alley’s entrance. His prayer-given strength was nearly gone (why was his Lord displeased?), but he knew escape would be fruitless. A power that could send dead men against him could use other tools; he might flee this courtyard, but he could not flee Edessa fighting a rearguard action the whole time.
Pivoting, he decapitated the nearer of the two ghouls, watched as the same thing happened: the head bounced in the dirt, and the body, still standing, stopped moving. He was sickened to hear that the lolling heads were still gurgling their unthinking hatred.
The dead men were too slow; he had this advantage, and he took it, slicing the third ghoul’s neck clean through with his backstroke. These at least would not be following him.
Daylight was brightening the sky above the courtyard, and he briefly considered weaving between the standing dead bodies to return to his room and retrieve his meager kit. But no: he had made a mistake coming to the city at all. As perilous as the open countryside had been to him in the last few weeks, it was preferable to a trap of unknown dimensions. He must leave Edessa at once.
He turned to slip down the alley passage, thinking he might be able to lose himself in the early morning market crowds. He was so intent on sheathing his rheum-streaked sword and planning his route that he failed to hear the footsteps behind him until it was too late. A cudgel blow struck the back of his head.
As he slid into unconsciousness, he thought: The innkeeper had betrayed him.