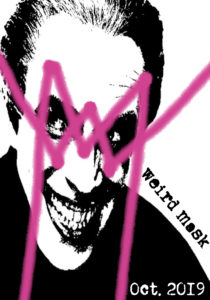 Mac is my name and I’d much rather be fat than partake in any pain gained. Unfortunately, my workout partner, DJ Beatman and I have been stretching and running and lifting and grunting and throwing up for a solid eight months now. My time of leisure has sure enough released from my ever capable grasp.

The gameification of the current world is no easier to level up than if located in a gym that sulks in the ever popular, mellow music of the chart toppers on a constant loop rotation. This arrangement of notes dressed up as a song that played above us was inexplicably encapsulated in the minds and hearts of even those beyond these walls. What more can I say?

“Push it! One more, Mac.” Beatman spotted me before the weight bench, two forty-five pound plates along with two ten pound plates resting on either side of the bar. I was on my last max out of ten reps for each three sets. It’s too ridiculously heavy, I arched my back at an angle not recommended, taking in a second breath as Beatman handled the bar with just enough strength to lead it upward, but not to lift it. He would downright despise a desire to cheat me out of any single lift. How very kind of him.

“Ahh,” arms straight, Beatman backed the bar onto its hold above my frame. Still resting on my backside, I continued my exasperation. “Whoo that one hurt.”

“Yeah, you didn’t make that look easy at all!”

I hopped up. “Your turn,” I said while already switching placements: He that of my willing victim, while I that of the psychotic bone-breaking villain.

Beatman counted his breaths before lifting and coming to count each rep as he advanced, “One … two … three … four …” His arms wobbled in a way commonly referred to as Chicken Wings, “Ahh … Five.” I sat the bar back, “Good job, there ya go.” Coincidentally, Chicken Legs can refer to an enormously upper-bodied builder with little intention to replicate the same refinement below the belt, calves and whatnot.

Two-minute water break. Really only so that I may focus on my maddening heart rate in hopes that no chunks of peanut butter and jelly with a side of 32 gram dusted chocolate protein shake will exit my body soon before its digestive period. Beatman strolled to the water fountain with an absolute loss of envy, arms swaying low to the side with his chest stuck outward. He had only seconds earlier showered in his own reflection near the long-scale mirrors set slightly above the dumbbells. I can’t yet decide upon standing up to follow in his cocky aura of sweat or to continue lying down. Both could be the hero to my temperature. I chose to lift not a thing in a state of uncouth numbness.

“Let’s go Mac! Heavy Squats.” Let’s go Mac, heavy squats. These entail having a long bar atop one’s adrenaline-fueled shoulders. We started off with three forty-five pound plates on either side, only increasing with a twenty-five pound plate on either side after each full ten rep set. And once I came at a full squat, a mountain assembled by the lost footed-limb of the almighty himself will be felt as tossed onto my shoulders. Miraculously, I lifted it.

Beatman positioned himself in my face after I hold my fall from the back pain these squats induce. “You good?” Beatman asked.

I shook my head to and fro with eyes in darkness imagining a light. “I’m good.”

He exhaled his patented one-two-three heart rate speed up slow down, breathing in and out thrice afforded at harrowing speeds. I often wondered if he really did allow his lungs to widen for any oxygen at all, as he does this act in such a quick succession to put fear in all who’ve had the kismet to aim a pupil in his direction leading to his execrably infantile expression. It is unlikely that the average adult must inflate and deflate his cheeks. Yet I’ll likely never mention this inspection; who am I to knock a ritualistic placebo? I often find myself hiding out near the side of my own house awaiting Beatman’s pickup with a sparked up cherry that I puff romantically into my lungs before each run. Ah, I’d love a puff about now. I’ve been systematically lessening my intake for six months now. Two packs a day down to two cigarettes alone a day. I can hear the coughed applause.

“9 … 9 … 9 …” Beatman grunted a few nonsensical nines before I came to from the far away lost world of no shiny baby-men, “I gotcha, DJ!” Lifting the bar, which had guards that twist to lock onto the frame, was the easy part. Beatman dropped to the floor back first, his face twerking between lifelessness and constipation.

“Bro!” Nothing. “Yo yo, wake up, bro!” I slapped him across the face, not an expression of concern from any of the other gym members. MP3 players and headphones will do that I suppose.

Beatman finally spoke, “Dude …” He trailed off into a grin, “… Your turn.”

Beatman leaned against the bar frame holding the many weights before us. “I’m gonna be sore tomorrow, but if you don’t pass out it ain’t a party partly.”

I rolled my eyes around about in amazement at his thinking. This guy needs a doctor, I thought. He had yet to even blink his eyes since they had earlier conveyed life was flowing through him.

“Your turn. Get your no havin’ ass over there.” I obeyed his eyes leading me to the frame, might as well be wearing wool.

Two and a half hours finally hit the wall and I could gladly drag my feet into the winter cold. Beatman had already made it to his crotch rocket of some design, “See ya tomorrow, Mac. Bright and early.”

I woke up the next morning with fire in my eyes and a stretch. This stretch set off a stampede of aching and quaking contemplation. My shower was not only sporadically filled with scolding hot water, but an idea after an idea and so forth.

Beatman rang me along through my cell, I did not yet answer. This man had a plan. The kitchen surrounded my bare body, behind was a trail of steamy foot puddles.

He called again. After I’ve located what I desire atop the counter I stepped closer toward my room, I almost slipped to my end if it were not for my instrument halting my movement as I descend. This cat has reflexes yet! I wonder if I’d miss such insurance.

The phone was ringing ringing ringing—I winced greatly before making it a point to possibly answer soon, even gnawing a chunk of my bottom lip in reaction to my actions—it finally stopped. Water wasn’t the only substance trailing me; I was going to indeed need more towels than the one hanging beside my shower, preferably dark in color. The stain of equal measured hot and cold along with disillusioned liveliness was nothing but a distraction from the red beading down off of the cleaver. And the hand, I wouldn’t have expected it to twitch so enthusiastically.

To Be Continued… TOMORROW IN WEIRD MASK!